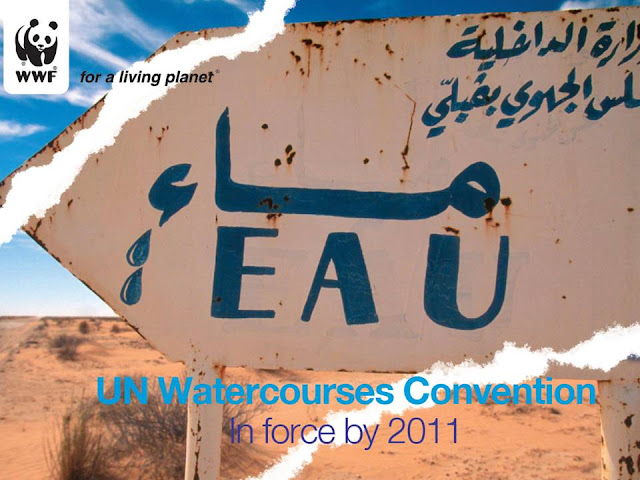 WWF promotes the ratification of the UN Watercourses Convention by year 2011. Check out the promotion postcards at http://assets.panda.org/downloads/postcard_final_16jun09_highres.pdf
and the main page of the promotion at http://wwf.panda.org/what_we_do/how_we_work/policy/conventions/water_conventions/un_watercourses_convention/ !
Posted by Elina at 9:27 AM 1 comment:


The project group chose one pilot case to see how the center works in real cases.
The chosen case is a Hydropower dam by Ethiopia on the Omo river which empties to Lake Turkana of Kenya.The hydropower project is on progress and arguments on the project have also continued.

The Omo River is a significant water resource of southern Ethiopia. Its course is entirely contained within the boundaries of Ethiopia, and empties into Lake Turkana on the border with neighboring country Kenya.NGO’s claim that proper impact assessment studies are not being carried out and the dam will threaten the livelihoods of tribal people and devastate fisheries in Kenya’s Lake Turkana. One of the active environmental groups, International Rivers, argues that the dam could be a development disaster for Ethiopia and the region and it sets preconditions for future international funds and further progress of the project.


The Ethiopian Electric power corporation (EEPCo) by its official document of environmental and social impact assessments states that the effects on the natural and social environment of the project appear to be negligible due to its geographic location.
EEPCo accuses NGOs of ‘going against the spirit of Copenhagen’ by opposing the project and says they were ‘trying to deprive Africans of the right to electrification. And it says ‘Kenya is the major beneficiary of this project. We are going to supply them with power. They are working on the agreement to provide power right now.’
Though the arguments as well as the hydropower project have still continued, some efforts are being carried out to let all the parties consider each other’s concern and work for the best practical scenario.
Helsinki Centre's proposal :

A proposal suggesting how the Helsinki Centre for Transboundary Waters would work in this pilot case by legal facilitation, organizing platforms and by conducting researches and publishing journals.more details of the proposal will be provided on the group's final report.
1. Legal facilitation


Enhancing the initiation for the countries to ratify the UN watercourses convention will be a major task for the centre. If the countries ratify the conventions, since the procedures for dispute prevention and handling are included in the convention, it will provide an acceptable reference to follow. The reference helps to reduce the current stress and the potential of having future water disputes in the region. In addition ,there is no common treaty on the use of the Omo-Turkana water way.
HCTW, in contact and collaboration with the UN waters and African Union, can facilitate the ratifying process for the UN watercourses convention and alternatively support the countries to create a bilateral binding regional agreement.
2.Platforms
Organizing seminars, meetings and workshops is an additional alternative task for the HCTW.For instance, the centre can facilitate the process of  Organizing a workshop for Ethiopian Electric corporation to present for discussion the findings from their environmental impact assessment, progress of the project and current situation of the project area.


3. Strengthening the regional monitoring unit
It is mentioned in EEPCo's side that an Environmental and Social monitoring and Management Implementation Unit is established in the region by Ethiopia. HCTW can get itself informed of the current status of the unit and support the effort by proposing better strategies to strengthen the unit. One way to list a few actions can be:

After going through the background situation of the pilot case the HCTW will be able to choose a valuable research topic in the area. For instance, to study the environmental and social impact, the centre can contact and work with research groups in Arba Minch University (regional institution of Ethiopia), Kenyan professionals and experts from the Finnish water forum. Then results of the background study and conducted research can be published on the centre’s journal. The publication will include implications of the results and alternative actions, which may help to preserve the livelihood.

Posted by Anonymous at 10:28 PM No comments:

An interesting article on the UN Watercourses Convention!

I read the article "Renewed hope for the UN Watercourses Convention" by Jamie Pittock, published in the Water21 -magazine in August 2009. It gave me new information on the ratification process of the Convention. I found especially interesting the different perspectives that the countries who have/haven't ratified the Convention have. I thought I'd share with you the best bites of the article, freely written:

The 5th World Water Forum was held in 2009 in Istanbul. Surprisingly, in Forum's thematic and regional panels, the support for the ratification of the UN Watercourses Convention was stronger than ever. In September 2009 the eighteenth member country (Spain) ratified the Convention, which means, that 17 more countries need to ratify it in order to the Convention to come into force. In the Forum, however, more than ten countries committed to join the Convention. Among them were Spain and France, which are likely to influence the Francophone and Hispanic countries.

Despite the strong support for the ratification, the UN Convention was missing from the key international processes announced at the Forum. Also, the 3rd UN Water Development Report launched at the Forum didn't mention the ratification and implementation of the UN Convention, although it predicted increasing water conflicts between countries. The Ministerial Statement of the Forum didn't have a specific mention of the Convention either, although "existing agreements" in general were mentioned. The Article didn't explain WHY the Convention was avoided from mentioning - it would be very interesting to know.

Some examples of different countries' perspectives on the ratification of the Convention:

Turkey (hasn't ratified): "Opponents to the UN Framework Convention have argued that each transboundary basin and dispute has its own peculiarities and characteristics and should therefore be treated spearately. The States which abstained (27) or voted against (3 versus 103) the Convention drew attention to the lack of consensus on several of its key provisions, mainly on those governing dispute settlement and further to imbalance created between the lower and upper riparian States." (President Suleyman Demirel in a 2004 speech to the Turkish Foreign Policy Institute)

Iraq (has "accessed"): "With the increasing demand and competition on water resources (...) and the intensive pace of construction of dams and water diversion schemes in neighbouring countries, it became obvious that an internationally accepted framework was the only viable solution for potential differences between the riparian countries. Only in this way can we ensure a real partnership between all relevant countries on water sharing rather than upstream verses downstream approach that leaves the downstream partners vulnerable." (Ambassador Hassan Janabi, Iraq's permanent Representative)

France (ratification procedure initiated): Regarding the 1992 UNECE Water Convention, The 1997 UN Watercourses Convention and the EU's Water Framework Directive: "The three instruments are essentially complementary. There wouldn't be any contradiction for France to join the 1997 Instrument. (...) The essential for us is more related to the wider scope of the 1997 UN Convention, which would become the first international instrument related to international watercourses, whereas the existing frameworks have only regional force. That would be a step forward." (Laurent Stefanini, French Ambassador for the Environment)

During spring 2010 our group investigates the needs for and develops a plan for establishing a transboundary water center in Finland. The project is part of a course called Sustainable Global Technologies -studio at the Aalto University in Helsinki, Finland. Our group consists of four people and one group mentor, who all have different study backrounds varying from economics to different fields of engineering.